Can Pardew’s Palace get one over on former side Newcastle?

Crystal Palace have been one of the Premier League’s most impressive sides this season and Alan Pardew’s leadership is a key reason for their success. The Eagles boss has gained invaluable experience at the likes of West Ham United, Southampton and Newcastle United and the seasoned veteran is now beginning to shine in charge of Palace.

Pardew’s men are currently tenth in the table but sit just three points behind fifth-place Tottenham Hotspur. Victory over Pardew’s former club, Newcastle, this weekend could see the Eagles climb up the Premier League table as they stake their claim for a Europa League spot. It would appear that Newcastle’s supporters aren’t optimistic ahead of Saturday’s trip to London…

If Sunderland can beat Palace, so can Newcastle…Oh wait, our players couldn’t care less! Pardew is bound to win #CRYSUN

While Palace haven’t been fantastic at Selhurst Park this season, the Eagles should be strong enough to pick up all three points against Steve McClaren’s men this weekend. The Magpies are struggling and have picked up just one victory away from home this season. After 13 matches, they are currently languishing in 17th place – just one point above arch-rivals Sunderland, who occupy the third and final relegation spot. At the time of writing, 32Red UK offer 18/25 on Palace to beat Newcastle and the hosts will stand a great chance if the likes of Wilfried Zaha, Yannick Bolasie and Yohan Cabaye are fit enough to start. Unfortunately for the Eagles, Bakary Sako will be ruled out after the forward suffered a hamstring injury in Monday’s defeat to Sunderland. Since Pardew took over as Palace boss in January, the Eagles have transformed into one of the best counter-attacking teams in the Premier League. While there might not be much counter-attacking to do against what is likely to be a very defensive side, Palace’s sheer speed and directness on the flanks will put fear into Newcastle’s defenders. The Magpies are one of the top flight’s most inconsistent teams and McClaren will be hoping that they can produce a similar performance to their heroic efforts at Manchester United and Bournemouth, rather than their shocking display away at West Ham earlier in the campaign.

In this encounter, Cabaye could be the man to swing the tie in Palace’s favour. As of November 25th, former Newcastle midfielder Cabaye is 5/2 to score at any time with 32Red UK in the clash. The France international will be keen to impress against his ex-employer and, as Palace’s chief set-piece taker, he may have numerous opportunities to test Newcastle goalkeeper Rob Elliot. Cabaye has a unique knack of popping up in the box to score crucial goals and it wouldn’t be a huge surprise to see Palace’s midfield talisman strike against his former side. Newcastle will be well aware of Cabaye’s threat but will already have their hands full with the likes of Zaha, Bolasie and Jason Puncheon. If the Magpies collapse under pressure, it could get very ugly indeed for McClaren’s men. One thing’s for sure, viewers should expect plenty of goals in this clash. In the last three league and cup matches between the two clubs, both teams have scored at least one goal on all three occasions. With that in mind, one should consider betting on both teams to score in Saturday’s clash. Winner price BTTS at 3/4. This is plausible as one would expect Newcastle to come out and attack if Palace go 1-0 up, whilst McClaren’s men will come under the cosh if they manage to take the lead. Pardew will be quietly confident of his team’s chances and will be looking to exploit Newcastle’s leaky defence – although the Eagles’ all-out attacking style may come back to haunt them if Newcastle catch them on the break. 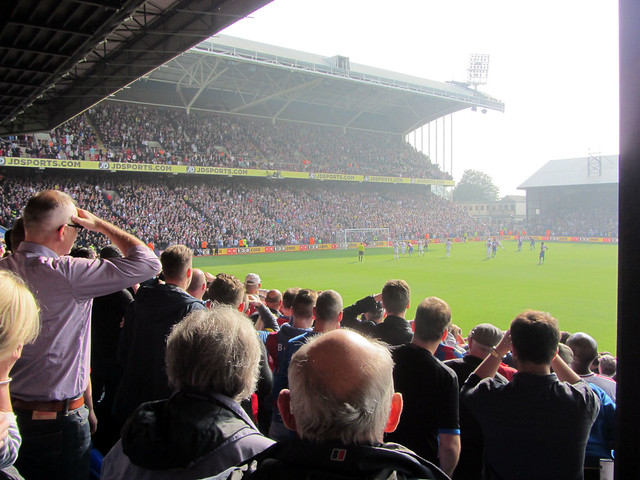 by Ungry Young Man
Pardew is a sensational manager and he knows exactly how to get the job done. He will be desperate to lead his side to victory against his former employers and, after their recent defeat to Sunderland, it wouldn’t be a huge surprise to see the Eagles produce a positive response. At 18/25, Palace are very well priced this weekend.